Hunters will have plenty to see and buy at the annual Grimshaw Gun Show from Sept. 21-22.

Excitement is building for the event at the Grimshaw Curling Rink.

“We have another sold-out show,” says Jerrold Lundgard, who organizes the show with the help of Paul Hebert and many other volunteers.

“The event is primarily a hunting and outdoors show and as it is hunting season, the focus is on firearms, archery, and hunting gear.”

A total of 30 exhibitors will travel from all over Alberta, Saskatchewan and British Columbia.

“Vendors give the hunters and target shooters who attend the show an opportunity to see and obtain products that are not available locally,” Lundgard says.

Crowds of about 1,500 people have attended the show in past years, Lundgard says.

Almost 80 per cent of the people travel more than 100 km to the event.

Two 22 rimfire rifles will be given away as a door prize.

The winner must possess a valid gun possession and acquisition license (PAL) to take possession of the gun.

A Chiappa 22 rimfire survival rifle and a Savage 22 semi automatic rifle [courtesy of Peace River Canadian Tire] will be given away to two lucky winners who attend the show.

Admission is $5 per day.

There’s either been an explosion in the black bear population in northern Alberta, or the bears are just getting bolder about coming into towns looking for food. Or both.

Either way, there are lots of them and wildlife biologists aren’t shy about recommending hunting as a way of reducing the population.

“There is no other big game animal in Alberta you can hunt through both spring and fall seasons,” says Jim Castle, senior wildlife biologist for the Lesser Slave Lake region.

Bear meat is a good and overlooked source of protein, Castle says, and the area provides “excellent hunting opportunities.”

Bear baiting is legal in some wildlife management units, Castle continues. On the other hand a ‘stealth hunter’ can have success, and fill the freezer this fall. And again in the spring, if he or she likes.

Alberta has an estimated 40,000 black bears, or rather ‘had’ at some point a few years ago when studies were done using radio telemetry and assumptions about range size factored in. Nobody really knows, but evidence in recent years suggests there are a lot of them. Notoriously, one visited a barber shop in Slave Lake back in August, and another was caught on security video entering the Red Earth Inn.

Trends in black bear hunting in Alberta show a peak in license sales in the late 1970s and a steady decline from there to the late 1990s. Since then the number has climbed, “with approximately 12,000 licenses sold each year since 2008,” says a 2016 black bear management report by Alberta Environment and Parks. Around 1,700 licenses are sold each year to non-resident bear hunters. Those result in about 2,800 black bears being legally harvested per year in Alberta by hunters. Another 210, on average are euthanized as ‘problem’ bears.

But what about that black bear meat? Castle says it’s delicious, and bear fat is also excellent for cooking.

George Gruenefeld, in an article in Outdoor Canada, writes about how surprised he was when ‘forced’ into dining on bear meat as a guest.

“It’s similar to venison, only sweeter,” he said.

For the 2019 hunting season Alberta Environment and Parks has implemented regulation requiring mandatory harvest and effort reporting on all special hunting licenses purchased.

It will soon be easier to complete Harvest and Effort reporting! You can either sign into your AlbertaRelm account or starting this fall, download the convenient AlbertaRelm App!

Replacement tag fees have been raised to $11.00 per license.

The minimum age to hunt game birds in Alberta has been reduced to 10 year olds.

Antlered Mule Deer in WMU 432 will require a Special License.

Antlerless Moose season in WMUs 318 and 324 have been closed.

Black bear season dates have been changed in multiple WMUs. A youth license for black bear has been created.

When registering a bighorn sheep, the hunter must deliver the complete unaltered skull with horns, eyes intact and the cape and lower jaw removed to a designated Fish and Wildlife office. Please call ahead to arrange an appointment to complete the registration process.

Alberta Environment and Parks is considering the following change for 2020. Beginning in spring of 2020, hunters must purchase a Wildlife Certificate prior to applying for a special license draw. 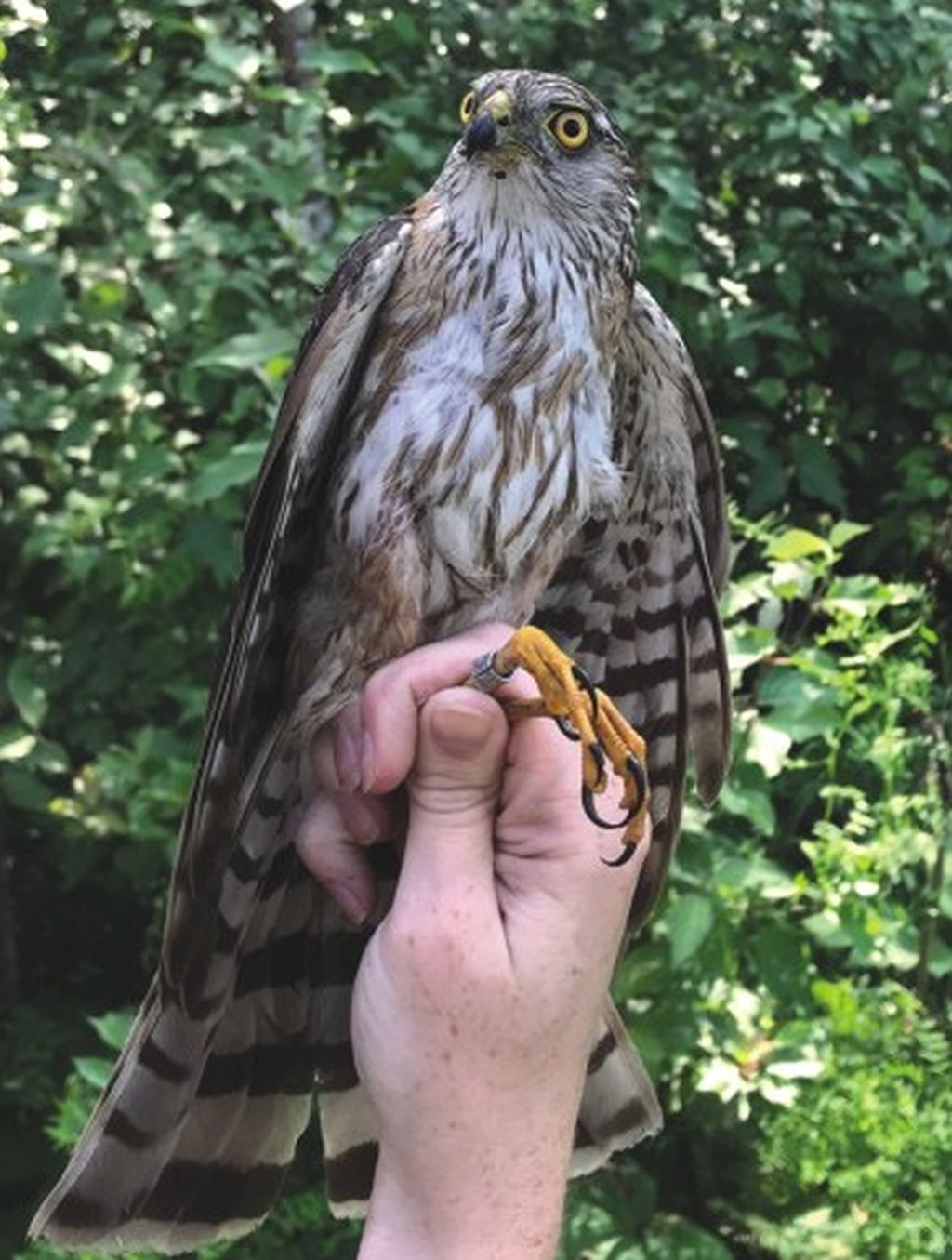 A sharp-shinned hawk. This species can be used for falconry, but this one isn’t. Courtesy of Robyn Perkins.

In answer to the question “would hunting with a falconry bird increase my chance for success?” Alberta Falconry Association (AFA) frequently asked questions (FAQ) says,“ No! Next to throwing stones, falconry is probably the least efficient of traditional hunting techniques.”

So what’s the point?

“Falconers are motivated not by the kill, but by the quality of the flight and the thrill of the chase,” says the FAQ.

“Falconry is the art of taking of wild quarry with trained hawks,” says the AFA information package.

Falconry is an ancient form of hunting, which has been legal in Alberta since 1981, says the AFA FAQ. Falconry in Alberta is connected with raptor conservation. Falconers must be members of the AFA.

To begin the long process of becoming a falconer, a person must be a resident of Alberta who is at least 14 years old and be accepted as a member of the Alberta Falconry Association. The levels of falconry are non-falconer, novice, apprentice, regular, and master falconer.

“The purpose of this category (non-falconer) is for those individuals who are interested in falconry or falconry birds, but who do not have any falconry experience or who do not wish to actively participate in the sport,” says the FAQ.

Novices can have one hawk. It must be a red-tailed hawk, Swainson’s hawk or American kestrel.

After at least one year of supervised experience, a novice can take a written exam to become an apprentice.

An apprentice can have two birds, but cannot breed them.

Regular falconers have three years experience. These are not restricted and can mentor.

Master falconers have seven or more years experience and knowledge on a broad range of subjects relating to falconry.

Falconry is regulated for three reasons: to protect domestic hawks, to protect wild populations, and to protect the reputation of the sport, says the AFA information package.

“Hawks need to be kept in a facility that has to be inspected and approved by a conservation officer,” says the AFA. “Usually this is a room of at least 8x8ft size, with cross ventilation, ample sunlight and a double door entrance. In addition, a similar size outdoor weathering area is required. There are other requirements, but these are the most basic elements of a mews.”

Building a mews and other set-up costs run to several thousand dollars, says the AFA.

“Only captive bred birds and those birds that have been legally imported into Alberta may be bought, sold or bartered,” says the AFA FAQ. “Traffic and export in birds collected from the wild in Alberta is not permitted, although such a bird may be transferred from one Alberta falconer to another.”

Another thing to consider is “hawks need fresh whole food,” says the AFA information package. “Poultry or beef for human consumption is not acceptable.”

This means falconers need a reliable source of quail, healthy pigeons, and mice to feed their hawks.

The AFA can be contacted through its website albertafalc onry.com which also has more information.