Hunters will have plenty to see and buy at the annual Grimshaw Gun Show from Sept. 21-22.

Excitement is building for the event at the Grimshaw Curling Rink.

“We have another sold-out show,” says Jerrold Lundgard, who organizes the show with the help of Paul Hebert and many other volunteers.

“The event is primarily a hunting and outdoors show and as it is hunting season, the focus is on firearms, archery, and hunting gear.”

A total of 30 exhibitors will travel from all over Alberta, Saskatchewan and British Columbia.

“Vendors give the hunters and target shooters who attend the show an opportunity to see and obtain products that are not available locally,” Lundgard says.

Crowds of about 1,500 people have attended the show in past years, Lundgard says.

Almost 80 per cent of the people travel more than 100 km to the event.

Two 22 rimfire rifles will be given away as a door prize.

The winner must possess a valid gun possession and acquisition license (PAL) to take possession of the gun.

A Chiappa 22 rimfire survival rifle and a Savage 22 semi automatic rifle [courtesy of Peace River Canadian Tire] will be given away to two lucky winners who attend the show.

Admission is $5 per day. 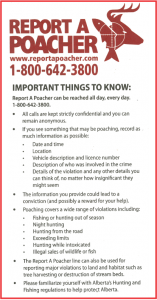